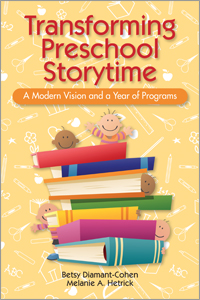 Transforming Preschool Storytime: A Modern Vision and a Year of Programs

by Betsy Diamant-Cohen and Melanie A. Hetrick

Drawing on research about how children learn, Diamant-Cohen and Hetrick propose a new model for storytime: one where repetition is built into the structure of ongoing programs so that children can build on what they have learned.   It sounds like a simple concept, but the key is to provide repetition in context, with enough variety to keep children engaged and allow them to approach the same material from multiple angles.  Doing so helps children to make connections, build on prior knowledge, and explore multiple skills – from following directions to building vocabulary to developing understanding of science and math concepts.

In addition to explaining the scientific basis of this approach, Diamant-Cohen and Hetrick provide 8 sample program series, each centered around an anchor text that is repeated, with significant variations, in each program.  Librarians who love programming by theme need not fear this approach – each program in the series brings the anchor text back in a new way, with a new theme each time.  For example, Candace Fleming’s Muncha! Muncha! Muncha!  appears in programs centered around planting, gardens, building, persistence, animals in gardens, and bunnies.  The anchor text is incorporated into the programs in a variety of ways in addition to straight reading: flannelboard telling, creative dramatics, comparing books by the same author and illustrator, using the International Children’s Digital Library, and more.  The authors also present suggested scripts for introducing the concepts surrounding the anchor text, as well as extensive suggestions for fingerplays, songs, and additional books for each program theme.  Patterns for flannelboards and crafts also appear in the book.

Whether you’re a librarian who is new to the idea of an anchor text in your storytimes, or a preschool teacher who uses the concept regularly, you are sure to find lots of inspiration here!

This site uses Akismet to reduce spam. Learn how your comment data is processed.